Emily Lynch Victory’s P1: Number System Base 16 is a complex set of grids of linear marks that resemble scraffito. At a distance her work appears to be an imposing minimalist painting with a densely worked surface. Upon closer examination the grid turns out to be a visual mapping of numbers expressed in different base systems. Visitors can appreciate the beauty of the accumulated markings with or without unraveling the system of numerical notations that generated the imagery.

At first glance, Infinity, by Daniel Dean, also closely resembles a minimalist work of art. The pristine construction and electric blue glow are reminiscent of Donald Judd’s light sculptures. The title Infinity combined with the circular motion of the light can be interpreted as metaphor for the cycle of life. But the image in the lighted panels is a painfully familiar one: the one that appears when our computer gets stuck in processing a task. Dean plays with the sublime notions of infinity and light using an image that is also an everyday symbol of frustration, an image that simultaneously evokes the feeling of things taking “forever” while waiting around in the prosaic realm of electronic dysfunction.

Ben Moren’s video installation River Suspension (Analysis) captures multiple images of the artist apparently hovering in mid-air over a river. The effect is starkly surreal. Using a very high-speed camera developed by the military for analyzing the trajectory of ballistic weapons, he instead tracks the trajectory of his own leaping body. The frames are so numerous that motion is nearly frozen, confounding our sense of time and gravity. Usually talk about the trajectory of an artist is in reference to a career path, not the physical body of the artist in motion. Moren elicits a complex emotional response to his fairly simple action, jumping, by modeling his trajectory physically and technically in a context where one expects pure metaphor.

This highly engaging exhibit also includes examples of book art, fiber art, algorithmic art and models of tesseracts (cubes imagined in the fourth dimension). Attendees who linger will be rewarded both by the masterful work exhibited and by the varied depth of information provided. The text panels are unusually well written, and additionally there is a table with an array of enjoyable mathematical puzzles, models, and books.

Seeing Math is on view through January 15, 2018, at Flaten Art Museum, St. Olaf College, Northfield, Minnesota. It is inspired by works of mathematically themed art acquired with The Arnold Ostebee ’72 and Kay Smith Endowed Fund for Mathematical Art. Established in 2014, this fund supports the acquisition and display of mathematically themed art at St. Olaf College. The museum will be closed during winter break, December 10, 2017 through January 2, 2018.

The current (December 2017) issue of the Journal of Mathematics and the Arts (JMA) is introducing a new feature, highlighting individual artists through their statements. The fist artist covered is yours truly.

Publisher Taylor & Francis is making the article available to everyone. You can read it here. The accompanying picture is also on the cover of JMA this issue.

Kelsey Brookes current solo exhibition at the Jacob Lewis gallery is titled ” The Mathematics Underlying Art”. I was so happy to see that the Fibonacci Sequence is a major theme for these large scale paintings. Each square canvas is divided into thirteen (13 is a Fibonacci Number) wedges radiating from the center point. Then dots are made along each dividing line at intervals that correspond to the Fibonacci Sequence. 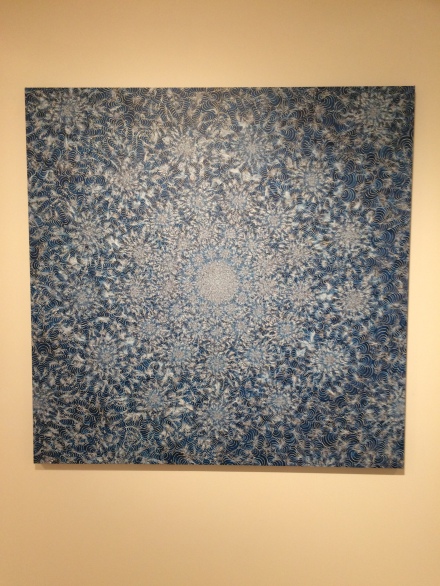 An intricate concentric pattern is painted around each dot, filling the surface.  The waves and undulations in this detailed work allude to the fact that Brookes is also microbiologist.

There are two sets of systems at work in this series. There is the overall predetermined structure, which features order 13 rotational symmetry and the uses the Fibonacci Sequence and the Golden Ratio to place each circle. Within this architecture,when you look more closely at the paintings you see the freer, expressive style . The mathematical structure creates a sense of order to contain the movement of the patterns. 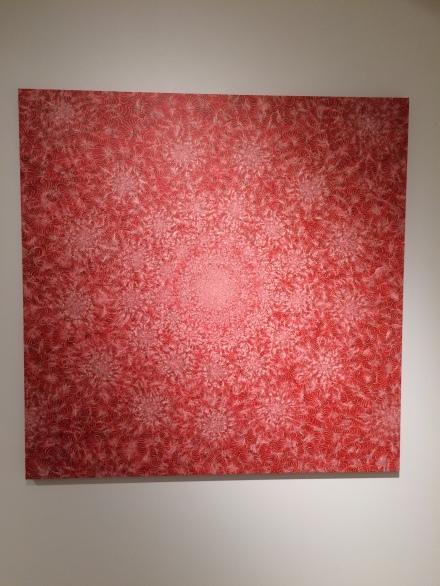 “Particulates” is Rita MacBride’s new site-specific installation commissioned by Dia for their Chelsea location. McBride has used industrial high-intensity light to define the space formed by a hyperbola rotated around an axis. 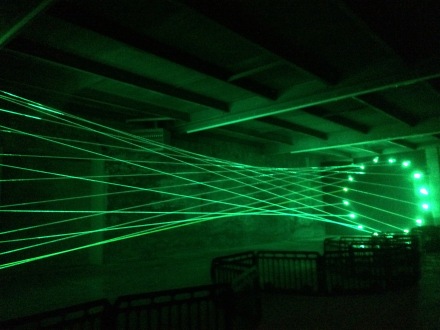 The bright green laser beams create the lines for this 3-D drawing. The atmospheric properties of the airflow in the gallery create a sense of motion. Dust and other particulates are caught in the blast of lasers and become dancing reflections of light. This results in an otherworldly experience for the viewer.
Susan Happersett