Here are two more great selections from the Art Exhibition at JMM. 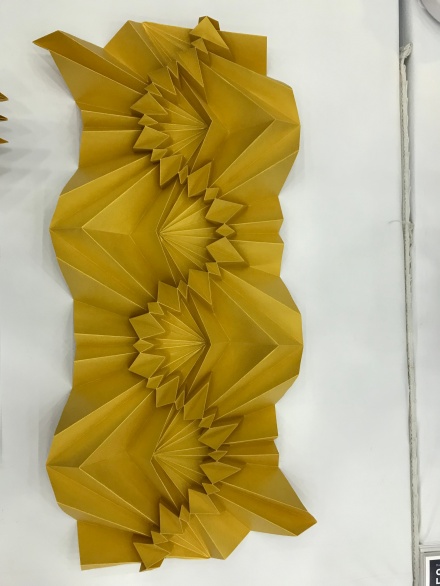 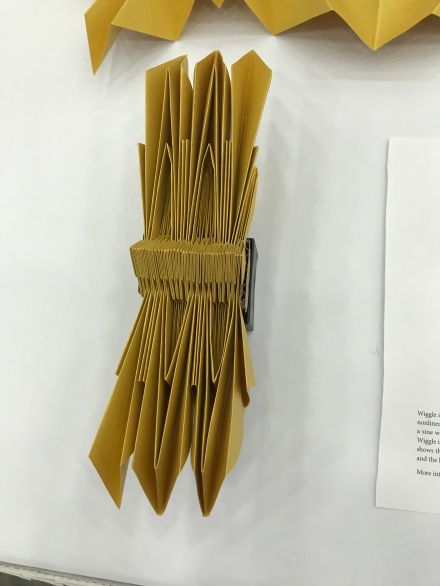 Uyen Nguyen creates computer generated origami. Using precise Mathematical calculations, “Wiggle” presents a raised modeling of a non-linear curve. It can be folded up accordion style into a compact pattern.

“Symmetrical Studies 19” an Ink on acetate drawing by Olivia Bridget O’Mahoney has an interesting order 9 rotational symmetry. The artist incorporates both a curvilinear wave type of illustration as well as a straight edge cubic rendering. O’Mahoney states that this piece  was inspired by the work of both Leonardo Da Vinci and Stephen Hawking.
Susan Happersett
Once again this year the most popular venue in the conference hall is the Art exhibition. There were dozens of exciting art works on display and here are just a few of my favorites.

Matt Enlow’s prints “Breaking The Ruled”  have been shaped to mimic the old school, student wide-ruled binder paper. In an interesting twist Enlow questions the confines of parallel lines. In this example the vertical red margin stays in its traditional location but the blue lines are no longer all horizontal instead the distance between them becomes smaller from left to write across the page. There is the perception that these might be parallel  lines going into the distance, utilizing rules of perspective.

Stephen Kenny explores the concept of nine point circles in his color pencil drawing “Nine Point Circle and Euler Line for an Acute Angle”. A Nine Point Circle is constructed in reference to a particular triangle. The nine points consist of : the midpoints of each of the three sides, the foot of each of the three altitudes, and the mid point between each vertex and the orthocenter (the point where the three altitudes intersect). Kenny incorporates these complex geometric constructions to define the abstract shapes and create straight-edge wedges of color.
Susan Happersett

This year the Joint Mathematics Meeting was held in Baltimore Maryland. There has been a lot of discussion into the mathematics involved in the patterns of knitting, crocheting and other needle crafts. One of the featured events at the conference was a Knitting Circle, where people could work on, and share, their fiber arts projects. Much of the work being produced had a mathematical component. Here are a few photos from the gathering.

Much more from JMM next week.

The MET Breuer is currently presenting a solo exhibition of the work of Julio Le Parc. Focusing predominantly on his work made around the year 1959, just at the time the Argentinian artist moved to Paris. Much of the work on display involves the use of sequences of geometric figures to create a sense of movement through space.

In “Rotation of Fractioned Circles” each of the unevenly divided circles remain the same. It the position of the dividing chord within each circle that changes as the circle rotates 10 degrees around it center point. The progression follows left to right then down to the next line then left to right again.

“Metamorphosis of a Line” is a series of nine panels beginning on the left with a horizontal line segment. This line segment seems to fold open becoming a rhombus with obtuse angles at the top and bottom vertices. These angles become smaller. On the fifth panel all vertices are 90 degree angles forming a square. The angles of the top and bottom vertices continue to decrease. The angles of the side vertices of become obtuse until the rhombus folds inward leaving a vertical line segment.

Le Parc’s elegant and precise gouaches illustrate geometric forms changing and moving through a series of consecutive images. These works are the precursor to his later Kinetic art in the 1960’s.