March is a busy month for art fairs in NYC.

The Armory Show is the largest venue, taking place on piers 90 and 94 on the Hudson River. There are a number of galleries featuring art with Mathematical themes. I will offer you a small sample of some of my favorites. 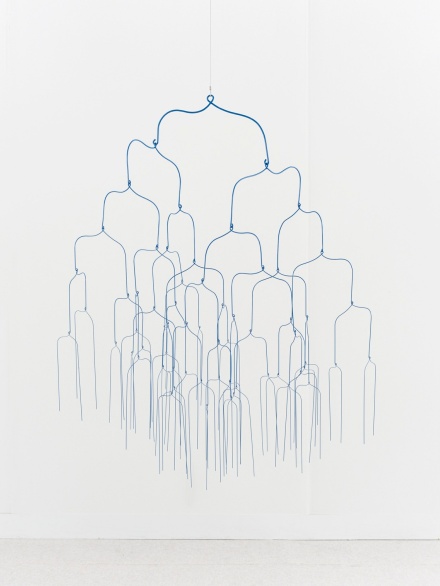 The Anne Mosseri-Marlio Galerie from Switzerland featured the work of Beth Campbell. This powder coated steel mobile titled “There is no such thing as a good decision (brilliant)” is a floating drawing presenting a schematic diagram of a series of two choice decisions. Starting from a single wire that offers two options. The number of choices doubles with each iteration.

The O S L Contemporary Gallery from Oslo, Norway devoted there space to an amazing survey of sculpture by Aase Texmon Rygh. Rygh is an important early modernist sculptor who explored many topological forms. 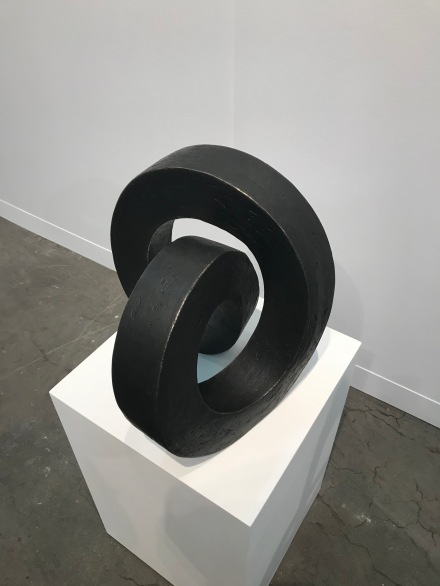 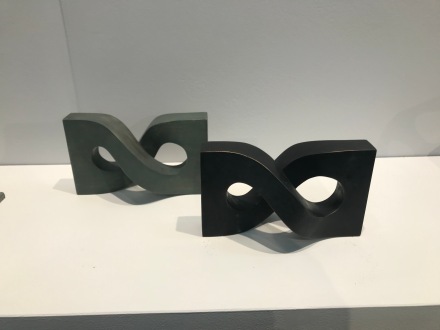 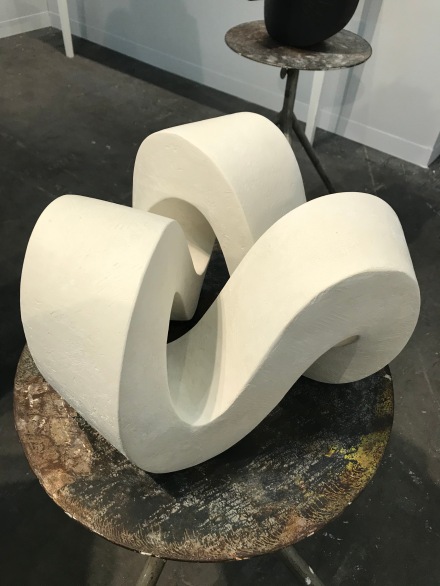 The art of constructing mobiles is a mathematical exercise. Creating a well balanced suspended sculpture requires the artist to calculate the appropriate distances for each of the weighted elements. “Calder Small Sphere and Heavy Sphere” is the inaugural exhibition at Pace’s new palatial gallery in Chelsea. 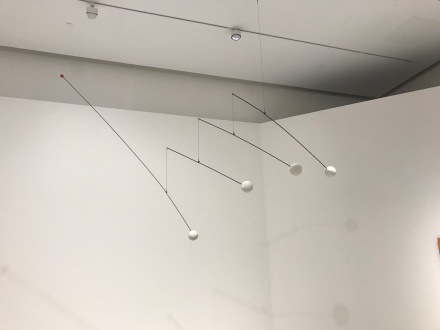 This “Untitled” Mobile from 1932 features four white spheres of various sizes and one tiny red sphere. The spheres are attached to ends of suspended rods. 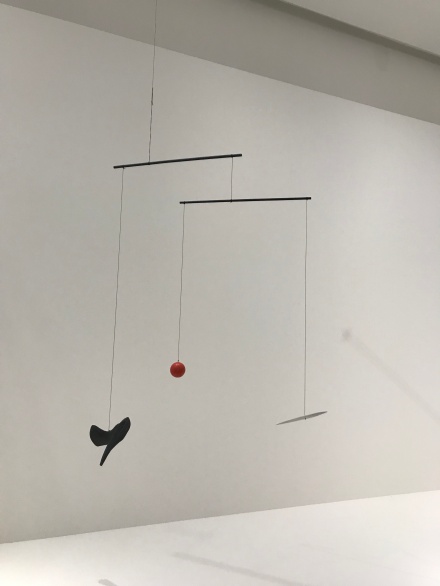 Sonnabend Gallery is exhibiting large wooden sculptures by Robert Morris. Morris is one of the most important American artists and preeminent practitioner of Minimalism. The twelve sculptures in this show are from his “Hardwood Series” and they are all recent reinterpretations of plywood constructions from the 1960’s. Craftsman Josh Finn facilitated the actual production of the work. I was particularly drawn to three totem-like sculptures that were each stacked columns of square planks. In “Serrated Column” (2012) each consecutive plank is rotated 90 degrees. Each square has diagonals that are parallel to the sides of the squares above and below. 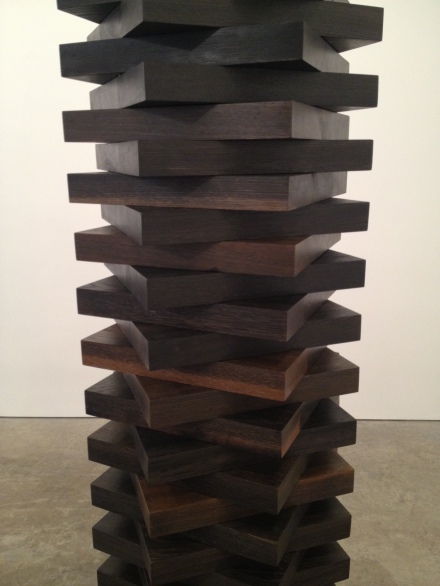 “Twisted Column” (2012) is a stack of  40 squares that rotate a total of 90 degrees. Each square is only rotated 2.25 degrees. This subtle rotation gives the illusion that it is a smooth surface instead of separate square planks. 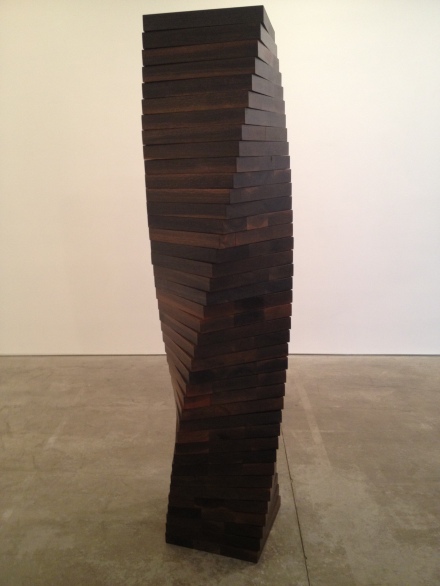 In “Spiral Column” (2013) the squares are rotated around a corner instead of the center. One full turn of the spiral is formed by planks. This work is an engineering marvel. Standing in front of this sculpture in the gallery it seems like magic that it does not tip over. Morriss’ column sculptures illustrate the many visual possibilities that can be explored using the repetition of a single geometric element. 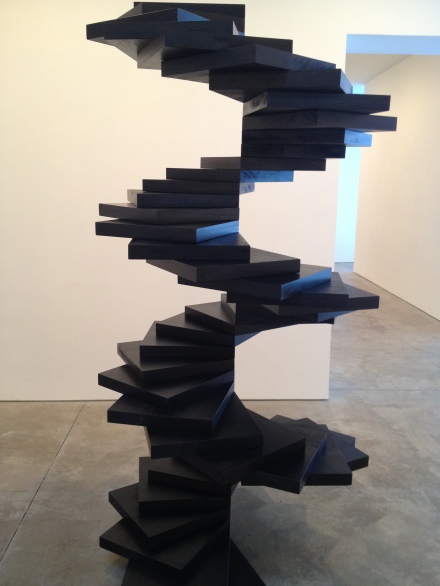 Beth Campbell at the Project Room at Josee Bienvenue Gallery

In the Project Room at Josee Bienvenu Gallery, Beth Campbell is exhibiting her drawings and mobiles in an exhibition titled “My Potential Futures”. The works on paper are handwritten text-based diagrammatic drawings. The wire mobiles are a 3-D extension of the drawings. The structure of the mobiles create a binary fractal pattern. Each mobile is attached to the ceiling by a single wire that then divides into two wires, then each of those wires split again into two wires each. The 4 wires split into two wires each (now 8 wires). This continues through 7 iterations. Start at the top and then there is a choice of two possible routes, a yes or no question or ones and zeros if you are thinking in binary code. 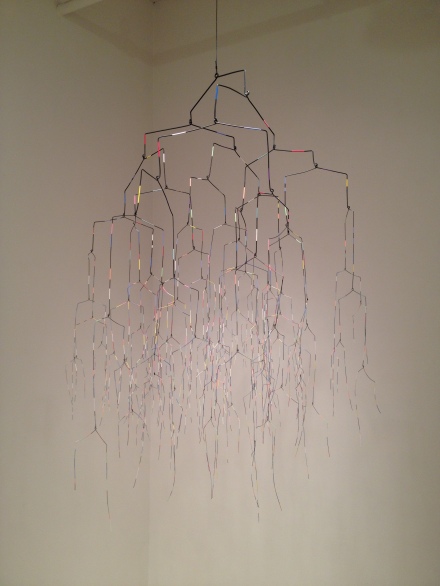