There are a number of artists who have been making mathematical art for many years. I have been following the work of Carlo H. Sequin and John Hiigli since I first became interested in the field. It was great to see some of their new work on display. 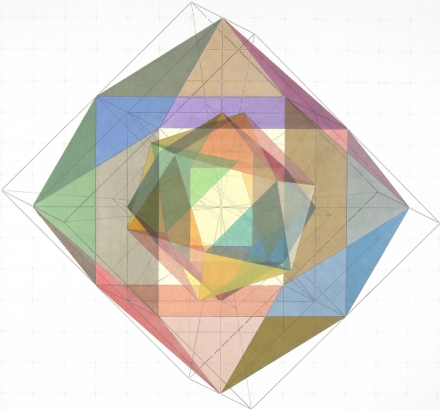 John Hiigli”s painting “Chrome 209” depicts a icosahedron, a polyhedron with 20 faces inside an octahedron, a polyhedron with 8 faces. The icosahedron is twisted, so that 8 of its faces share a plan with on of each of the 8 faces of the octahedron. Using transparent oil paint Hiigli lets us see inside of the shapes, creating an elegant geometry of color within the delicate straight line schematic drawing.

Christopher Arabadjis used only blue and red ballpoint pens to create this drawing. Using 2-D depiction of octahedrons in square at the bottom of the image, Arabadjis begins a process of projecting 3-D forms onto a 2-D plane. The squares become parallelograms. Then after the 6 by 6 grid of octagons is complete, Arabadijs adds two more rows to give the illusion of another dimensionality.
Susan Happersett
Once again there was a lot of interesting art on display at the Bridges Conference this year. Way to much to write about in my blog. To see more work the entire gallery is available on the Bridges website.
It is always difficult to pick a few pieces, but I will choose six over two blog posts. 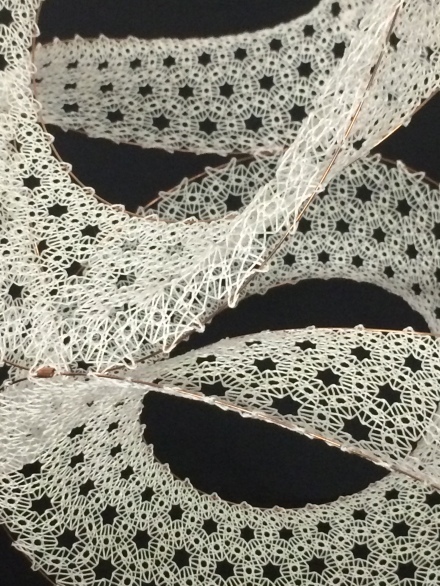 Veronika Irvine’s sculpture “Delle Caustiche (Sagittarius Star Cloud)” incorporates the art of bobbin lace making into a 3-D surface. The hexagonal lace pattern has been altered to create a disc formation with larger hexagons at the outer edge of the curves. It required 3 rotations of this disc process. Copper wire has been used to give the lace structure. Irvine’s intricate band of lace graceful curves up and out of the plane.

Guy Petzall’s “Obloid Whorl” pop-up model is masterful created, using a single sheet of paper.  Cutting and folding along a grid format, Petzall creates what he refers to as “a whorling meander motif”. The flat paper has been transformed into a rising spiral.

Lee Angold used water-soluble carbon to hand paint “Pinus nigra”. It is a an exploration of Fibonacci spirals found in cones of the Austrian pine, but with a twist. Cones with imperfect Phylotaxis are also included.
Susan Happersett
This year the Bridges Math Art conference was held at the University of Waterloo in Ontario, Canada. To coordinate with the conference, the University Art Gallery (UWAG) presented the exhibit “Passage + Obstacle”, featuring work that addresses the mission of the Bridges organization, as well as metaphorical bridges that allow transport over obstacles. 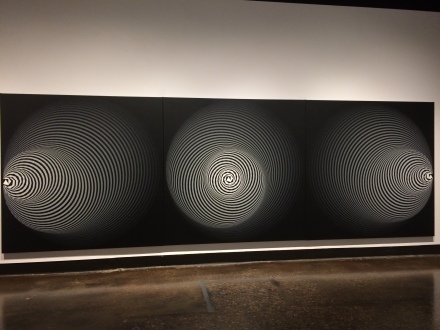 In Andrew James Smith’s triptych painting “Protogon Shift”, each of the three canvases begins with a triangle at its center. A series of 98 polygons are connected to form a spiral composed of all straight lines. Leading us from the most basic polygon (triangle ) to the most complex. 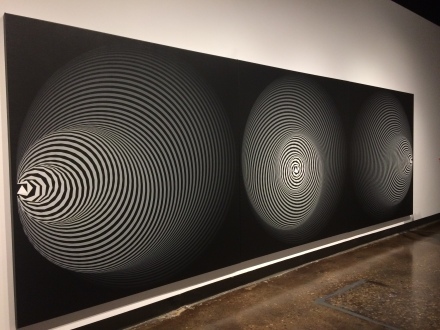 “Protogon Shift” (triptych), Andrew James Smith, 2014 (side view)
Picture courtesy of the gallery and the artist

The images changes appearance depending on the viewer’s vantage point in the gallery.

Laura De Deckers video “Composition in Red, Green, And Blue” was created using custom computer code written by the artist to create prints. Using just the three colors De Decker transforms computer language to abstract visual images. Here is just a short sample of the video.
The Bridges conference also sponsored its own art exhibition which I will write about in future blog posts.
Susan Happersett