What a long strange year it has been. I am so happy to be able to go to museums again.

Rayyane Tabet’s current exhibition at the Metropolitan Museum of Art addresses the four reliefs of Tell Halaf that have ended up in the MET’s collection. The exhibition explores Tabet’s family’s connection to the reliefs. Tabet’s great-grandfather Faik Borkhoche worked as a researcher for the excavation. Borkhoche was given a 65 foot rug by the Bedouins of Tell Hala that is the subject of Tabet’s installation “Genealogy”

The rug was to be cut into 5 equal sections, one for each of Borkhoche’s children. Then it was to be divided again in equal section for each subsequent generation.As time passes sections get smaller and smaller creating  visual fractions of the genealogical history of the artist’s family.

The Metropolitan Museum’s current exhibition “Making Marvels: Science and Splendor at the courts of Europe” presents an amazing selection of treasures that reflect the cutting edge technology from 1550-1750. Just like today, back then, owning the newest tech most expensive gadgets was a sign of wealth and power. This concept was magnified in the 16th-18th centuries with the royal courts demanding the finest materials and the most gifted artisans to produce these tools and scientific renderings.

This 16th century instrument of the “Primum Mobile” created by Ignazio Dante using design by Petrus Apianus is the only one in existence. Named for the outer sphere in the incorrect geocentric model of the universe it was actually made as a tool for trigonometry to calculate sines and cosines.

King Henry II of France owned this Encryption Device made in 1550. Instead of using a fixed alphabetic translation this mechanism could use a series of separate transformations.

Geometry was a part of a royal education. The Platonic Solids were a popular subject. This German Writing and Reading Box from 1570 features perspective drawings created using inlays of wood, ivory and mother of pearl.

The Metropolitan Museum in NYC is currently presenting “Apollo’s Muse The Moon in the Age of Photography”. Commemorating the 50th anniversary of the TV broadcast of NASA’s Apollo 11 mission this exhibition early photographs as well as prints books and ephemera.

This is a page from Charles F Blunt’s 1942 book “The Moon’s Phases ,in Lectures on Astronomy;Beauty of the Heavens; a Pictorial Display of the Astronomical Phenomena of the Universe”.In the center of the diagram Blunt has placed a circle representing the moon divided into two sections. Encircling this moon are two concentric rings of twelve circles

For me one of the most impressive displays was the 19th century astronomical photography. All 71 plates of Maurice Loewy and Pierre Puiseux’s “Photographic Atlas of the Moon”. Here is one wall of the installation. 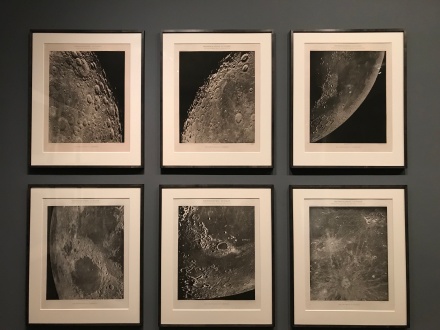 The multitude of perspectives on the same spherical orb is an elegant exploration of it’s geometry.

Each Spring the Metropolitan Museum of Art unveils a new installation. This year the museum is presenting an Alicja Kwade”s installation titled “Parapivot”.The two steel and stone sculptures are based on perceptions of solar systems. Each is comprised of a series of rectangular black steel frames with stone orbs balanced on the beams. One structure features 3 intersecting rectangles and the other has 5 rectangles.

Here is the sculpture with 5 rectangles.
Each of the five frames are perpendicular to the ground. Looking at the work from a distance the view of the rectangular frames is distorted, appearing to be trapezoids and other irregular quadrilaterals.

Focusing on the  intersecting lines of the bases of the rectangles helps to understand how the shapes have been arranged in space. Building  a 3-D steel line drawing to create flat open planes juxtaposed with the weightiness of the stone spheres Kwade presents questions of perception.
Susan Happersett

This Spring the Metropolitan Museum of Art expanded its exhibition space into what used to be the Whitney Museum on Madison Avenue and is now called the “MET Breuer”. “Unfinished, Thoughts Left Visible” is one of the two of the inaugural shows. “Unfinished” features art which was never fully completed either by determination of the artist or by chance. On the forth floor of the museum there is a gallery with more abstract work that deals with the concept of infinity. The nature of the infinite creates a continuum in the work, thus alluding completion.

One of best visual interpretations that I have seen of Zeno’s Arrow Paradox is in the form animated video. “La Flecha de Zenon” by Jorge Macchi and David Oubina begins the way many movies begin, with a count down of numerals from ten to one, but, when you think some other action will start after one, the numbers are divided in two and expressed as a decimal. As the numbers get smaller and smaller the length of the decimal gets longer and longer until the digits get so small they seem to disappear. We are left to believe they go on forever and zero is unattainable.

Another artist in the exhibition that has a relationship with infinity is Roman Opalka. Beginning in 1965, he began a series of paintings on which he started to paint the numbers up to infinity. Each set of digits is hand painted in white on a grey background. The artist completed 233 canvases but of course never completed the project.

These examples highlight the way numbers can be used as a tool to express themes of time and infinity and their effects on the human condition.

Pictures courtesy of the Metropolitan Museum of Art.

Every year in May the Metropolitan Museum of Art presents an elaborate fashion exhibit. The Costume Institute at the Museum produces a huge show, not in their usual space in the basement, but instead in transformed rooms in the main galleries. This year the exhibition is titled “MANUSxMACHINA, Fashion in the age of Technology”. It examines the way relationship of couture designer clothing and the use of machines. I was not expecting to see any Mathematical references, but I was pleasantly surprised. 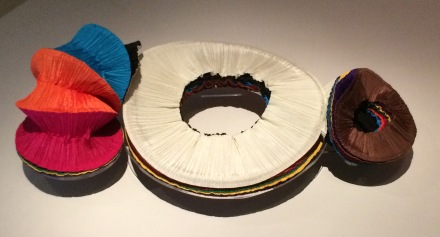 The  pleats on “Flying Saucer” Dress by Miyake Design were machine garment-pleated, creating a series of pleated circles. When lying flat it is easy to see the large center circle that create the body of the dress and smaller circles that form sleeves. The center points of the circles are in a straight line.

When the dress is opened to show its accordion construction, the body and sleeves become pleated cylinders.

The “Bahai” dress by design team Threeasfour features 3-D  printed elements by Materialise. The structure of this dress alludes to complex geometries. Here is a quote from Threeasfour from the exhibit’s wall signage:

“Next-generation 3-D modeling programs were used to construct the six degrees of fractal growth where each element operates independently from the rest”.

It is obvious mathematics was an intrinsic tool used to create this garment. As more and more designers have access to advanced technology, there will be great opportunities for them to use Mathematical themes and processes in their work.

In between observations on math art in Manhattan galleries and beyond, a quick shout-out for my own art work. Two of my collaborations with Purgatory Pie Press are now for sale at the new “Paper Project” gallery at the Metropolitan Museum of Art (back of the lobby on the left side when you come in through the main entrance).

Box of Chaos is a series of 4 paper sculptures based on Chaos Theory.

The “Happersett Accordion” is a modified, folded Moebius Strip

When you think about evening gowns, mathematics may not be the first think that comes to mind, but Charles James used geometry and engineering to design his stunning sculptural creations. In 1944, Vogue Magazine referred to his “Mathematical tailoring”.
The Metropolitan Museum has devised an exhibition that celebrates the mathematical structures of James’ work using technology to enhance the viewer experience. Robotic arms with cameras and video recorders present close-up details of structural elements of the gowns. X-rays provide an inside glimpse at the architectural support systems. Computer models provide 360 degree topological maps of the twists, spirals, and folds incorporated into the fashion. Unfortunately it was very dark in the gallery and impossible to take photos but the Metropolitan Museum has a great website with videos and images at metmuseum.org. I have included two of my favorite dresses. 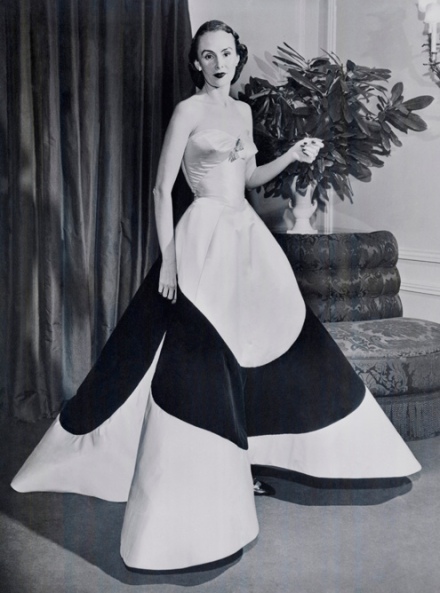 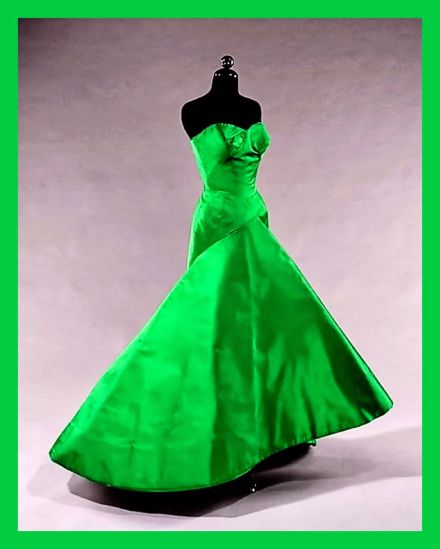 The green satin Spiral dress incorporates a spiral of fabric that seems to flow directly back into itself creating an Moebius strip that encircles the wearer.

There are many other examples in the exhibition of the complex geometry utilized to design these creations. Throughout his career James was also involved with teaching other designers to use his mathematical techniques. He invented his own schematic dress forms and mannequins that are also on display at the museum.

The engineering nature of Charles James’ approach to fashion combined with the technologically curated presentation of the Metropolitan Museum creates an exhibition that reveals connections between Mathematics and fashion design.