Glenn Horowitz Bookseller’s gallery Rare is currently showing the work of Sjoerd Hofstra with Karen O’hearn. On display are some of their artist’s books, featuring finely engineered kinetic elements. The subject matter of these books is directly mathematical. “A study in Averages” is a schematic treatise on the relationship between averages and society.

“Elements of Geometry by Euclid” includes pop-ups of the geometric solids. The mathematical texts have been blurred and instructional line drawings have been added. 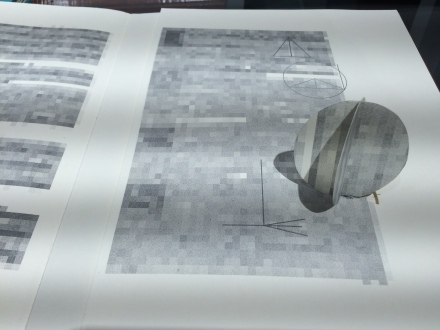 “6 Empty Bookcases” is more architectural, but each of the bookcases presents interesting geometric 3 dimensional properties as it folds off the page.

What I find refreshing about Hofstra’s and O’hearn’s books is the clear unabashed connection to the mathematics. Whether addressing the societal implications of the use of averages, or creating their own interpretation on the historical Euclidean text, or using sophisticated calculations to build their geometric bookcases, the artists embrace mathematics.

I realize how difficult it is to see the true interactive nature of these books through my inadequate photos. The artists have provided a video link so you can see their work in action.

The use of repetitive geometric patterns is a prevalent theme in abstract art. Lori Ellison’s paintings and drawings celebrate the hand of the artist, featuring a lyrical, hand drawn quality. Through the use of basic geometric shapes Ellison created lively compositions that hum, buzz and pulsate. The current exhibition at the McKenzie Fine Art gallery include small scale paintings on wood panels and drawings on notebook paper. All of this ambitious work was completed the year or so before the artist’s death in 2015.

This gouache on wood panel from 2015 measures 14 x 11 inches. Its compact format holds a profusion of triangles. The almost parallel columns of almost isosceles triangles are packed tightly on the plane. Alternating the the red and pink shapes, all of the red triangles seem to point right and all pink ones point left. This forms an interesting dialogue between positive and negative space.

In this close up of the same panel we can see more clearly that this work is not about the accurate measurement of pure clean geometry. It is some ways more complicated, more human. This is definitely a painting about lines, triangles, positive and negative, but it is also about the artist. The personal scale makes the viewer stand close to the work and be drawn into the patterning. Art can be about mathematics with out having to use a ruler or striving for perfection.

The current exhibition in the North gallery room of the Klein Sun Gallery is called “The Simple Line”. The show features the work of Beijing artist Gao Rong. Each of Gao Rong’s installation pieces is based on a circular hoop framework. Threads are stretched across the circle from evenly placed locations around the circumference. Although the basis of her subject matter is circular, through careful placement of the threads Gao Rong is able to create geometric arrangements featuring straight lines and angles.

This work contains a square grid of nine squares with the center square darkened with the overlapping of many lines of thread. this work at first appears to have two axis of reflection symmetry but this is only superficial. Upon closer inspection we see that some of the corners of the of the squares are much darker than others and taking that into consideration there is an order-2 rotational symmetry. 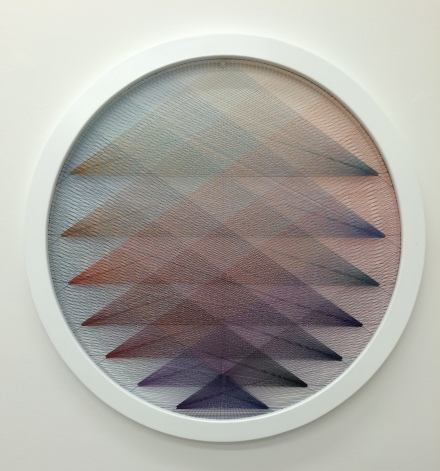 The next work is based on triangles. Starting at the bottom with single unit  isosceles triangle, then moving up the structure, this single unit is overlapped by a triangle with a base twice as long. The next overlapping triangle has a base three times the length of the initial triangle Each subsequent triangle gets larger but also lighter in color. The shape seems to fade into the top of the circular frame.

There are two sets of theoretical juxtapositions in Gao Rong’s work. First and most is obviously the fact that the work illustrates linear structures within a curvilinear environment. Second, there is also the social statement of the use of colored thread, traditionally seen in women’s decorative needle work, to create very structured geometric diagrams that are heavily influenced by Mathematics.

Happy New Year!
I decided to start 2016 with a big show and the Frank Stella exhibition at the Whitney Museum definitely qualifies as a really big exhibition. When the elevator door opens into the first gallery,the viewer is met by two very different canvases: a large, geometric, consecutive squares painting, and a huge abstract that is exuberant to the point of being Baroque. The dichotomy of these two works highlights the the range of styles and themes explored throughout the galleries. On display are the all black paintings from the late 1950’s, as well as the colorful geometric square-and-shape canvases from the 1960’s. Also included are the wall sculptures from the 1980’s and the more recent work created using 3-D printing.
For the purposes of this entry I decided to concentrate on Stella’s paintings from the 1960’s. These works are clearly about geometry. Some of the artist’s sketches and schematic diagrams are on display as a group. I highly recommend taking a close look at these plans, they really highlight the mathematical processes involved in the paintings.

The two canvases of  “Jasper’s Dilemma” each have the same  spiral geometric structure, but the left canvas features a system of the color spectrum, while the right canvas is composed of shades of gray. Stella has built these spirals within the squares by creating two sets of isosceles triangles. The set with vertical bases are slightly larger than the triangles with the horizontal bases. This results in only one diagonal line on each canvas and the four triangles do not all meet at the same point. 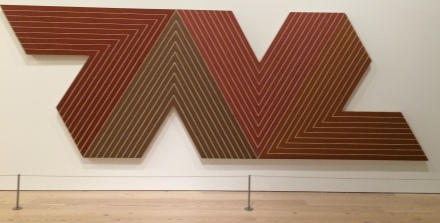 “Empress of India” is a monumental shaped canvas featuring a series of four V-shaped sections, each featuring a line of reflection symmetry and a 60 degree angle at the point of the “V”. There is also an interesting line of order-2 rotational symmetry running diagonally through the center section of the work.

Both “Jasper’s Dilemma” and “Empress of India” spotlight Frank Stella’s dedication to developing complex geometric structures in his work during the 1960’s.