Matteawan Gallery is presenting “It’s About Time” a solo exhibition of the work of Eleanor White. On display is the kinetic wall sculpture “Continuous Timer”. This work is comprised of hundreds of glass and sand timers arranged on a spinning wheel. Featuring a high order of rotational symmetry by adding movement this piece references the infinite symmetries found in circles. 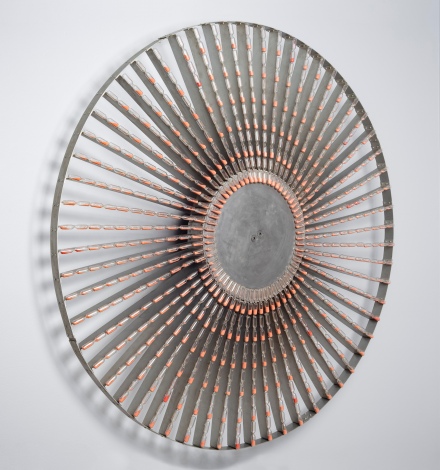 The constant re-leveling of the sand within each glass timer breaks the symmetry with the introduction of the concepts of gravity and equilibrium.
“Continuous Timer” is one of the best examples of a work of art using mathematics as a metaphor for time and relativity that I have seen.

The Matteawan Gallery in Beacon New York is currently exhibiting the work on paper of 17 diverse artists. Two of the artists, Greg Slick and Eleanor White, use geometric themes while exploring unique textural elements.

This composition by Greg Slick features a 2 by 4 checker board grid centered on a square background made up of four pieces of used sandpaper. The proportions for hard-edge minimal painting is inspired by the dimensions of ancient archeological sites. There is an interesting dichotomy between the spare black and white grids and the rich, almost suede-like, surfaces of the used sandpaper. 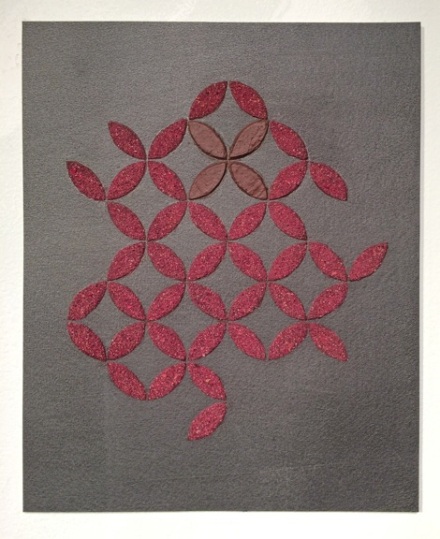 Eleanor White uses pulverized rose petals and cocoa powder to explore the properties of square grid overlapping circles. This work features complete and incomplete circles of the type in which each circle has four other circles intersecting at points with equal 90 degree arc lengths. White’s use of materials underscores the organic nature of circular formations.

Although all of the artists in this show work in very different themes and media, there is an underlying similar sensibility to the work. The gallery presents a cohesive experience of thoughtful and sensitive work that is not often seen in such a large group show.

I have written about art in a variety of mediums,  but Eleanor White’s recent work on paper currently on display at the Matteawan Gallery in Beacon, NY is probably the most unique. White incorporates crushed egg shells and wood ash into paint resulting in a beautiful but gritty texture. Minimalism and 1960’s and 1970’s design are references for the artist and lead to the geometric qualities of the work.

“Untitled” 2015 eggshells, wood ash and paint on paper
Picture courtesy of the artist and the gallery

In this first drawing, “Untitled” from 2015, there is the obvious reflection symmetry with the line of symmetry running vertically through the center of the work. There is also the interesting visual effect of the thickness of the parallel bands of color. Narrow vertical section blend into thicker horizontal bands.

This next drawing is all about circles. It features a top layer of a 2 by 5 grid of slightly overlapping sets of 4 concentric circles. Each circle composed of dots of ground egg shells. The inner circles have 13 dots, then 20, 27 and finally 34 dots in the outer circle. The underlay of circles is a 3 by 6 grid of solid circle. The 2 by 5 grid packs elegantly on top of the 3 by 6 grid. It is an excellent illustration of how the proportions 3:6 relate to the proportions of 2:5.

White’s work has a lot of geometric and numerical mathematical elements. There is also a more subtle theme in the shapes of the tiny bits of crushed egg shells. The original oval 3D shape of the egg has been fractured and spread across the flat plane of the paper. But if you look closely you can still see tiny bits of the curved planes. These optical remnants of the original eggs give these drawings a complex surface that is inspired.

Matteawan Gallery in Beacon, New York is currently exhibiting works on paper by Dominick Talvacchio, in a show named “The Eros of Mathematics”.  Talvacchio has a background and education in mathematics. His work has been exhibited extensively throughout the United States and Europe. The visual dialog in his print and drawings express his interest in the inherent beauty of the order and structure found in mathematics. 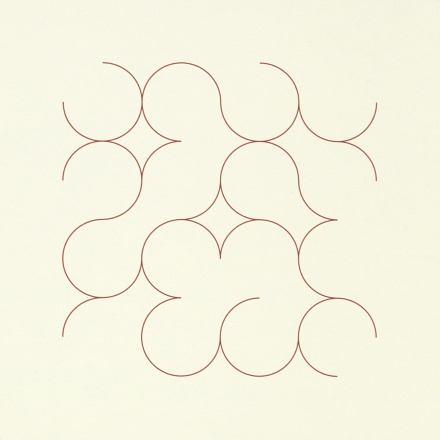 In the print “Arcs Missing Arcs”, Talvacchio has created a 4 by 4 grid of touching circles with only sections of the circles visible. These arcs create a series of graceful and organic curves. The viewer senses the existence of the underlying grid pattern, but is allowed to enjoy the sensual aesthetics of the segmented curves.

The drawing “Kairovan Below” features two elements. First, an underlying, lightly-drawn tiling. Second, a selection of line segments from the tiling, drawn in a darker black. The tiling has a four-fold rotational symmetry. Within this symmetrical pattern there are five-point non-symmetrical stars. The juxtaposition of the overall symmetry of the tiling against the not-quite-symmetrical stars creates an interesting tension. By making some of the lines darker and more pronounced, Talvacchio allows a simplified but elegant pattern to emerge.

On June 1st from 2-4 at Matteawan Gallery there will be an artist talk and closing reception for “The Eros of Mathematics”. I will be there to participate in the discussion about the relationships between mathematics and art. All are welcome.

Matteawan Gallery is located in Beacon. A small city north of New York City, situated on the Hudson River. It is the home of DIA Beacon, a museum dedicated to displaying long-term, large-scale gallery presentations of single artist displays, with emphasis on conceptual art and minimalist work. They have an excellent selection of Sol LeWitt’s wall drawings currently on view. I would suggest DIA Beacon as an excellent destination for a day trip for any math art enthusiast. While you are in town, check out the galleries on Main Street.