This summer I had the privilege of seeing Manfred Mohr’s video “Cubic Limit” from 1973-1974. I was so happy to be able to see it again at Bitforms Gallery in NYC this Fall. The gallery is presenting “Manfred Mohr A Formal Language: Celebrating 50 Years of Artwork and Algorithms (1969-2019”. There is the full range of Mohr’s art on display including some more recent work.

The video “P-777_MA1” from 2002 is a dynamic colorful computer driven dance of geometry.

The exhibition has been extended until November 3rd

The painting “Terraform (Soundings)” from 2018 was generated by first staining the canvas and then tracing and diagramming stains. These overview maps of fictional landscapes utilize rule based systems and offer commentary on power of technological surveillance.
Susan Happersett
Beryl Korot is well known for her work in the 1970’s that juxtaposes the art of weaving with modern technology. Her current exhibition “Beryl Korot: A Coded Language” at bitforms gallery follows her work from 1980 up to and including new work from 2017.
In the entryway of the gallery there is this chart that outlines her algorithm for translate the alphabet into a series of weaving rules.

This set of transformation becomes procedure to create “Babel1”, acrylic on hand woven linen, from 1980. This piece is the Tower of Babel story from the bible transcribed into a textile.

I think “Babel 1” is a fantastic example of algorithimically generated art. I am so happy that bitforms presented Korot’s schematic cart allowing the viewer a complete visualization of her artistic process.

A solo exhibition entitled “Drift” by c is currently installed at Callicoon Fine Arts Gallery on the Lower East Side in Manhattan. The show is made up of a diverse selection of work, addressing the plight of refugees lost and perishing at sea. Bergvall has published an artist book also titled “Drift” with Nightboat Books. Although the theme of the art included in this exhibition is not mathematic, one of the pieces in the show does have a mathematical component.

Courtesy of the artist and Callicoon Fine Arts, NY

The video “Seafarer” from 2014 consists of electronic text that floats in and out of view in a 17-minute loop. The sequence of textual images has been produced using algorithms to determine which words appear at each moment in time and and space. The words in video take on an ghostly presence as they move in and out of focus. When discussing the topic of Mathematical Art, I feel that it is important to include work that has been produced or generated by mathematical algorithms. Although the subject matter of Bergvall’s body of work is not Math, the use of mathematics was essential in creating the ethereal and emotionally moving environment to present her text.

Sol LeWitt’s ” Wall Drawing #370″ is currently on display in a long  corridor on the first floor of the museum.

The directions for”Wall Drawing #370″ are: “Ten Geometric Figures (including right triangle cross X, diamond) with three-inch parallel bands of lines in two directions”. LeWitt wrote the conceptual plan for these drawings in 1968.

Each of the ten panels feature alternating black and white lines that run either vertically or horizontally. The shapes depicted, however,  feature curves and non-right angles, and lines that cross do so in a perpendicular fashion. 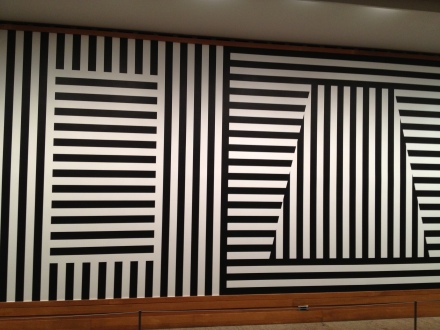 Each shape also has some type of symmetry either reflective or rotational.

I have always been a huge fan of Sol Lewitt’s Wall Drawings. Besides the obvious geometric mathematical elements to the work LeWitts underlying conceptual process shares theoretical similarities with Mathematical Algorithms.

In 1967 Sol LeWitt published his “Paragraph’s on Conceptual Art” in Artforum magazine. Here is an excerpt:

“In Conceptual Art the idea or the concept is the most important aspect of the work….all planning and decisions are made beforehand and execution is a perfunctory affair. The idea is the machine that makes the art.”

As a comparison I want to look at what David Berlinski  writes about algorithm in his book “The Advent of Algorithm”:

“As Algorithm is  a finite procedure, written in a fixed symbolic vocabulary governed by precise instructions, moving in discreet steps,1,2,3…whose execution requires no insight, cleverness, intuition, intelligence, or perspicuity, and that sooner or later comes to an end.”

I feel there is definitely a relationship between Sol LeWitt’s description of Conceptual Art and the way that mathematical algorithms perform, I also see a connection in this early work of LeWitt and the birth of the computer age….. But I will leave that for another blog.
If you are going to be in NYC anytime in the next 14 months, go see the Wall Drawings at the Metropolitan.  They are powerful and graceful and up until January 3, 2016!