It is the final week of August and most of the art galleries in NYC are closed so for fun I decide to write about the mathematics of Mary Blair’s artwork for the “It’s a Small World” ride at the Magic Kingdom. On a family vacation earlier this year while riding one of my favorite rides I noticed how many types of symmetry were involved in the design. I found numerous examples of rotational symmetry.

Here is a series of flowers with order 8 rotational symmetry.

These flowers have order 4 rotational symmetry because of the alternating colors .

This decoration with order 12 rotational symmetry and it actually rotates!
I hope everyone is enjoying their Summer Holidays.
Next Month I am back to the galleries.
Susan Happersett

Every January there are a whole host of Art and Antique Fairs in NYC. One of my favorites is the Metro Curates Show. This event features dealers that together present a broad eclectic selection: Ethnographic Art, 20th century Modernist abstract paintings, folk art, as well as new work by contemporary artists. 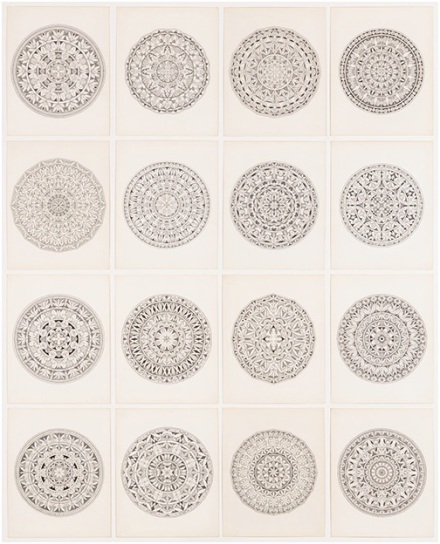 In the Ricco Maresca Gallery booth I found this amazing grid of drawings made in the 1940’s by Constantine Karron. These intricate works were all handmade using basic drafting tools. All but one of the 16 drawings are circles or regular polygons. The elaborate decorations feature rotational symmetries of varying degrees up to 16-fold. The precision and detail in these drawings is amazing. The only work that does not feature a circle or a regular polygon and  has only 2-fold rotational symmetry is the drawing in the third column from the left, and is the third down from the top of the grid. This is a drawing of an irregular 16-sided polygon (hexadecagon) that has both horizontal and vertical lines of reflection symmetry. Ricco Maresca Gallery is displaying and selling these works as a group. Although each of the drawings is very interesting on its own, together they have an even more powerful visual impact.

Annette Cords’ handwoven jacquard tapestry “Combined Operations” from 2012 was on display at the Umbrella Arts booth. I was immediately drawn into their space when I saw the geodesic spheres woven into this work. Cords also creates paintings and installations all dealing with systems of information and physics. The geometry of the spheres are quite clear but the jacquard weaving technique gives the lines a nice sketch quality. The lunar background gives the work an ethereal presence.
I spoke with Umbrella Arts gallerist and curator Margaret Bodell about my interest in Art and Mathematics and she gave me a preview of some of the amazing work that will be featured in the next show at their gallery in lower Manhattan.  The exhibition is titled “Off the Grid” and it will take place from February 5th to February 28th. I will definitely be heading downtown to see and review the show. I know already there will be art with interesting Mathematical connections.

The German artist Pius Fox is having his first solo exhibition in New York City at Pablo’s Birthday Gallery. The title of the show is “We expected something better than before” and features  wonderful abstract paintings, whose geometries are based on interior architectural elements. I have chosen two works that seem to me to have the most mathematical significance. 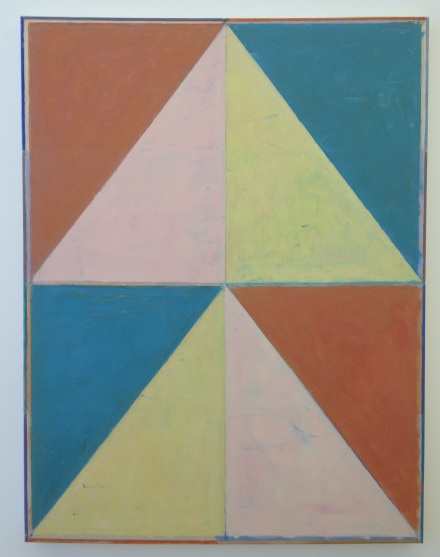 The first painting is “Zeitland Schaft”,  an oil painting from 2014. This work features four rectangles. Each is bisected diagonally to form eight right triangles. What I find interesting about this work is how it relates to the work of Piet Mondrian and Kazimir Malevich. Malevich used the geometric forms as his subject matter: the paintings were traditional in the fact that, even though he was depicting  abstract themes, they were still  pictures  of shapes within a background. In Mondrian’s square canvases the square itself becomes both the format and the subject. There is no longer a delineation between subject and artwork. I feel that in some ways Fox’s work is taking this use of geometric forms a step further. In this painting rectangles and triangles might – at first glance – seem to be the subject of this work, but in fact it is much deeper. The geometric shapes are a vehicle for Fox’s use of layers of color and his lush painting technique. The symmetrical properties of the painting – for example the glide reflections in the placement of the pink and yellow triangles – enhance the relationships of colors, making them seem to glow.

The next painting I would like to discuss is an untitled oil on canvas also from 2014. I Particularly like the use of both line and solid shapes this painting. Dividing the rectangular canvas into four columns and four rows, Fox has set up an interesting grid to draw lines connecting the points of intersection on the grid. Lightly drawing in both diagonals of each rectangular grid cell, he fills in a dark isosceles triangle in the top half of each. This creates a strong pattern that superimposes the other lines of the painting. Behind the triangles there is a 180 degree rotational symmetry to the red blue and gold lines. Looking at this  painting the viewer gets the feeling that it is about more than just the geometry. Again,the shapes are the language that Fox is using to convey a sense of place.

Using symmetry to create a work of art is one way that Mathematics can influence an artist. But what happens when an artists uses symmetry and then makes one small change to upset that symmetry? The resulting work can express very different and exciting dynamics. I saw an exhibition of work by Julije Knifer (1924-2004) at the Mitchell-Innes & Nash Gallery  in New York. Looking at Knifers drawings and paintings it is obvious that using reflection and rotational symmetries were a major aspect of his work.

In APXL made in 2003-2004 there is a vertical line of reflection symmetry, but what is also interesting is how each of the “S” like figures would have an order 2 rotational symmetry if the artist had not truncated the outer columns.

Knifer used some type of symmetry in a lot of the work on display at this exhibition, but in much of the work the perfect symmetries were in some way altered. 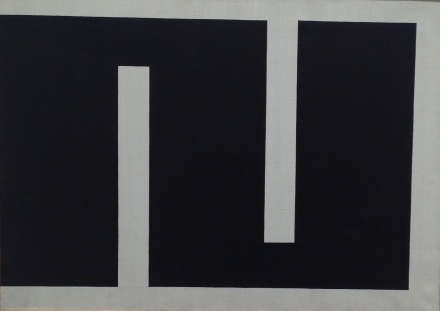 The figure in the painting MK 69-43 from 1969 has an unblemished order 2 rotational symmetry but the figure is not centered on the canvas. There is an interesting sense of tension in this canvas because of the imbalance.

What I find so interesting about these works is how they make me think about symmetry. At first I was not going to write about this exhibition because only one painting had a complete and clear symmetry. But I kept thinking about the paintings and drawings and after a while I realized that by creating these imperfect symmetries Knifer has given us a different but inspired way to look at symmetry. There is enough of a framework provided so the viewer is looking for order in the symmetries, but is thrown off balance. Maybe this uncomfortable imbalance is the perfection of this work.

Julije Knifer is is one of the most important Croatian artists of the 20th century. His work is in many museum collections including MOMA in NYC and has had exhibitions at The Centre Pompidou in Paris and the Museum of Contemporary Art in Sydney Australia. In 2001 he was selected to represent Croatia at the Venice Biennale.