The Whitney Biennial exhibition closed last week, but for those of you unable to visit the museum I wanted to briefly discuss a few examples of work with Mathematical implications.

Terry Adkins’ large wall installation “Aviarium” from 2014 was assembled using repurposed stacked cymbals. Adkins was a musician and the sizes of the cymbals were determined by the mathematics of bird songs. The horizontal columns of circles protruding from the gallery wall become a physical manifestation of sound. 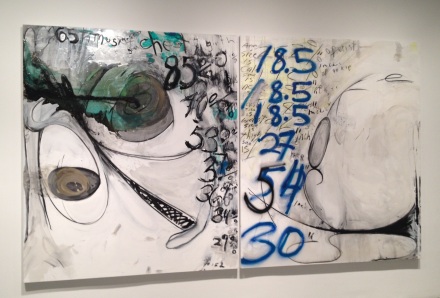 In her diptych “Ideal Proportions” 2013, Suzanne McClelland explores the psychological and social implications of our relationship to numbers. McClelland’s expressive renderings of groups of Arabic numerals reveal the anxiety and judgement associated with numbers that refer to the weights and measures of the human body.

Ceramicist Shio Kusaba has created a series of vessels featuring striking pattern work. I am particularly interested in her pieces that have grid patterns. The use of linear rectangular grids on the organ forms create a subtle juxtaposition between the curved surfaces and the lines. I find the spaces  where the gridded sections meet in triangles fascinating. The concept of lines on curves is an area of geometry ripe for artistic exploration.

The Whitney Biennial always received a lot of attention and press. Now that the excitement and fan fare have concluded I wanted to offer some personal observations.