The Elizabeth Dee gallery in Harlem, NY is currently presenting “With the eyes of others, Hungarian Artists of the Sixties and Seventies”. The exhibition is curated by András Szántó. The works in this show are not that well known in the United States, but are an important part of twentieth century (art) history. These artists worked under a repressive regime and had to find ways to express their opposition through subtle means. Making geometric abstract work  was a way to show a connection to Western artist like Frank Stella and Al Held with out overt political connections.

Károly Halász’ “Radial Enamel I-IV” consists of four square enameled iron plates. Using only bright yellow, dark blue and black to create tension between the narrow acute triangles, radiating from diagonal corners of the squares. The lines of symmetry in this work are a bit tricky. At first glance you think they would run from upper left corner to lower right corner, because of the lines created by the bases of the triangles along the diagonals. But, because of the alternating dark and bright colors, this is not the case. Instead, the lines of reflective symmetry are the four diagonals running from the upper right corner to the lower left corner of each individual square, as well as the same diagonal for the work in its entirety. 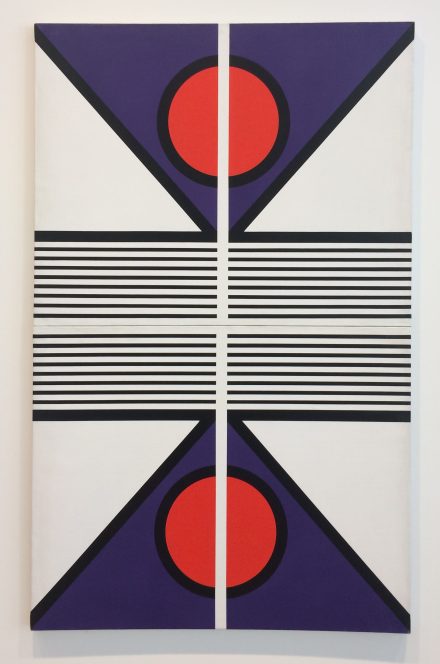 Imre Bak’s 1974 painting “Landscape Transformation” presents a mathematically stylized landscape. Featuring a series of parallel lines, right triangles, and half circles this work has both horizontal and vertical lines of reflection symmetry. Alluding to traditional landscape painting, but using the vocabulary of the geometric hard edge painters, Bak is signaling an allegiance to the Western European and American art communities.Susan Happersett