Vera Molnar is an early practitioner of computer art. A founding member of the “Groupe de Recherché d’art Visuel” (GRAV), Molnar utilizes technology to create abstract art. Her exhibit at Senior and Shopmaker Gallery includes computer drawings made between 1968 and 1986 as well as some earlier hand drawings.
Using the programming languages Fortran and Basic, Molnar generated images that explore a multitude of variations on a particular geometric theme. 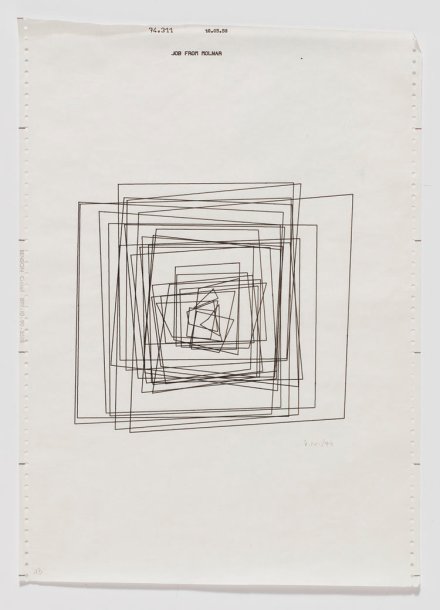 These two ink prints from 1974 – both titled “Hypertransformation of 20 Concentric Squares” – are printed  on Benson plotter paper. Exploring concept of concentric squares with an interesting twist, the computer allows for a multitude of variables. Molnar added an unexpected element of chance by creating small deviations in the programming. This extra element of uncertainty gives the work a frenetic sense of motion contrasting the stability usually associated with the humble square.
Susan Happersett