One of the trends that I have noticed in geometric drawings and paintings is the use of overlapping circles. There were two particularly interesting examples at the Armory Fair. 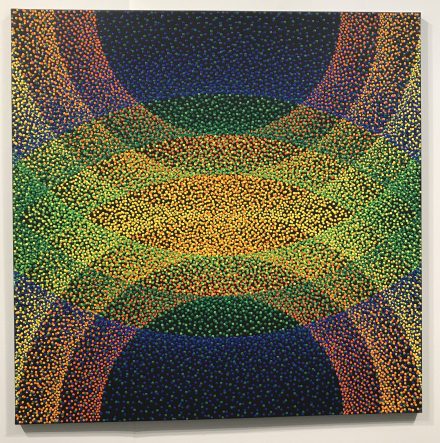 In the Galeria Nara Roesler booth, Julio L Parc’s painting “Alchimie 420” from 2018 was on display. This work offers a pointillistic representation of two half circles with concentric arcs radiating out from the top and bottom of the canvas. As the arcs get larger they overlap at the center and fall of the picture plan on either side. 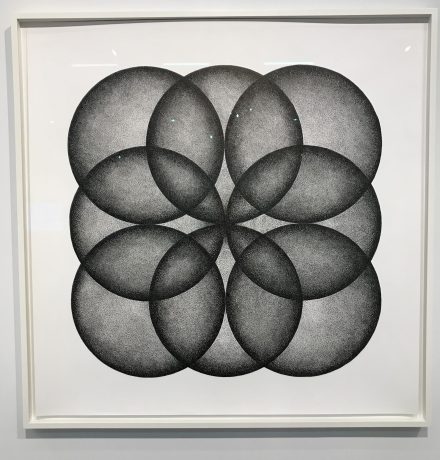 The i8 gallery from Reykjavik Iceland presented Ignacio Uriarte’s 2018 ink on paper “ Eight Circles Form a Square”. Uriarte’s circles feature a textural shading technique that give them a 3 dimensional presence, but at the same time they appear somewhat transparent because you can see all parts of all 8 circles even they are over lapping. The square structure is formed by two columns of three over lapping circles and over that there is a central column of two non-overlapping circles. There are four sections where three circles and overlap.

These giant art fairs can be almost overwhelming. It is almost impossible to see everything. Buy because there is so much art in one place it is exciting to see how different artists deal with similar geometric themes.