The current exhibition at the Luring Augustine Gallery in Chelsea, “Empty House Casa Vazia”,  features sculpture that is associated with the Neoconcretism movement in Brazil from 1959 until 1961. Neoconcretism was a reaction against the rationalism of Concretism. Although Neoconcretism continued the use geometry to create abstractions, they were not interested in pure form. Instead, they introduced a human element.
Lygia Clark was an important member of the Neoconcrete movement. She added a participatory element to her sculptures. The viewer was encouraged to manipulate her hinged metal sculptures. I have written an earlier blog post about the MOMA exhibition of Clark’s work, but I was not permitted to take any photos, so I was thrilled the gallery is allowing me to share a photo now.

“Bicho” consists of a series of sheet steel isosceles right triangles (isosceles triangles whose vertex angle is 90 degrees). They are hinged together to form a complete loop that can be arranged in many different positions.

Lygia Pape’s series of wooden wall sculptures titled “Livro da noite e dia” features a series of 6 1/4″ squares. Each square has at least one geometric shape removed from the edge or corner. Then those shapes, triangles, squares, trapezoid….are shifted and layered onto another part of the square resulting in interesting symmetries. 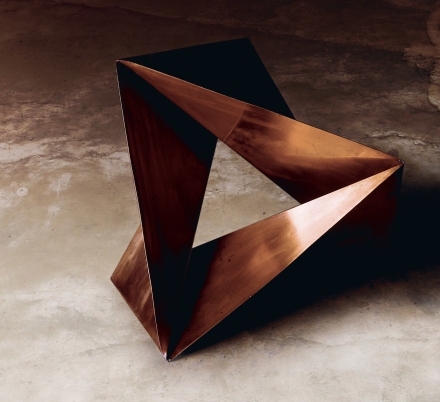 “Estrela”, a copper sculpture by Amilcar de Castro, is made up of three rectangles. Each rectangle has been bisected diagonally and folded and joined together to make a sculpture with all sorts of triangular possibilities.

These practitioners of Neoconcretism employed mathematics in their work, particularly Geometry. But their art was about something even deeper, it was about how humans interact with the geometry. This is achieved in a different way by each of the artists: In the case of Lygia Clark through tactile manipulation, Lygia Pace’s intriguing puzzle-like squares encourage the viewer to ponder the missing pieces, and De Castro’s sculpture invites the viewer to walk around the work, because it changes dramatically depending on the location and angle from which it is viewed. In some ways these sculptures reveal more about our relationship with Mathematics than many other artistic movements.
Susan Happersett