Dikko Faust is the printer and co-owner of Purgatory Pie Press, a letter press publishing company in Tribeca, Manhattan that he runs together with Esther K. Smith. Faust also teaches a course on Non-Western Art History at the City University of NY. It was his experience in looking at Non-Western patterning that has lead to his recent series of prints called Tesselations. The prints are made by hand setting bits of lead to create the pattern, using only red and black ink. Each patterned print has its own set of distinct symmetries. Today, I will discuss two prints from the series.

The first one is “Tesselation 4 -Nessonis 1: Pyrassos”. Printed on the back of the card is the following descriptive text: “A serving suggestion for a Middle Neolithic stamp seal design found in three sites in Northern Greece”: 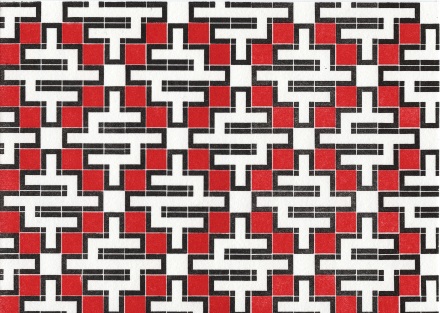 I see this print as a fragment of a wallpaper symmetry, because the repetition in the pattern is based on the symmetries between the shapes. The white figures with the black outlines that resemble a $ or an S and the 8 red squares around them have order 2 rotational symmetry. If you rotate the figure 180 degrees, you have the same figure again. Each of the $ or s shapes has glide reflection symmetry with the upside down $ or S in the rows above and beneath it. In a glide reflection symmetry we see the mirror image of the original shape, but then it is glided or moved along the plane (in this case, along the paper).

The second print is “Tesselation 6- Magnified Basketweave”.  The text on the back of the print states “aka Monk’s Cloth or Roman Square Quilt As seen on NYC sewer covers”:

This print is a great example of reflection symmetry. It has two lines of symmetry: one horizontal though the center, and one vertical through the center. Another interesting mathematical feature of this print is the similarity between the larger sets of black or red bars and the smaller sets. Two figures are similar if they have the same shape and are only different in size. Both the large set of bars and the small set of bars form two sides of a square:  all squares are similar. The inner rectangle of larger bars measure 5 sets by 7 sets. It requires a rectangle of 11 sets by 15 sets of the smaller squares of bars to frame the large rectangle. There is a border with the width of one small square, so after subtracting 1 set from each dimension, we have the inner rectangle of 5 by 7 surrounded by a 10 by 14 rectangle of smaller sets of bars. The ratio of the dimensions of the larger to the smaller is 2:1.

Faust has made a whole series of these striking Tesselation prints. He has been inspired by what he has encountered teaching  art history, and what he sees all around him looking at art, and in the case of Tesselation 6, the streets of New York City. The mathematics in these prints go beyond the patterns themselves and connect the viewer with distant times and cultures, and links us all in a visual aesthetic.