E.A.T Experiments in Art and Technology 1960 – 2014 is the current exhibition on display at the Payne Gallery at Moravian College in Bethlehem, Pennsylvania. This small show documents the collaborations of artists with scientists and engineers from Bell Labs in NJ. Two Bell Labs engineers, Billy Kluver and Fred Waldhauer, started working with artists, providing them access to the newest technology. In 1966 they helped bring together 30 scientists and engineers with 11 artists to produce a cutting edge performance art series called 9 Evenings: Theater and Engineering in NYC. Through these partnerships, the engineers were trying to do two things. They wanted to address the effects of technology on society, and they were looking for new ways to explore this technology. Not all of the work was performance art, it also included  sculpture, drawing and architecture. 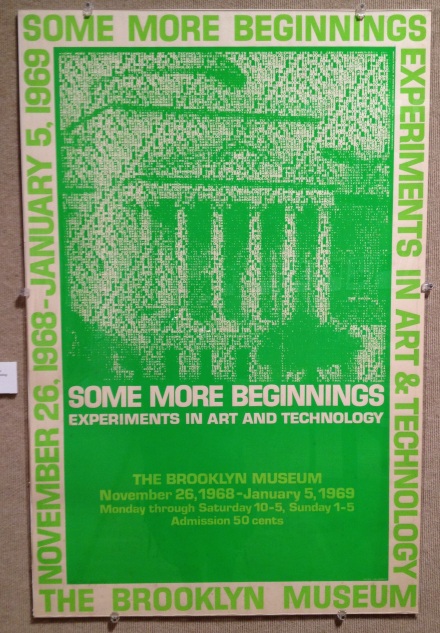 The Brooklyn Museum – Experiments in Art and Technology – Poster – 1968

What does this have to with Math Art? If you look at the time line for these collaborations you see that in 1966 computers were the new technology. Some of the art work done in these experiments was based on Mathematical algorithms.

Robert Rauschenberg was one of the artists closely involved with E.A.T. One of his projects was a series of six “Revolvers”. “Revolver II” from 1967 is on display in the center of the gallery. It consists of 5 plexiglass circles that have been printed with silk screen. They rotate independently when one of five buttons is pushed. Because the circles are transparent, the different rotations (1, 2, 3, 4, or 5 circles at a time) create interesting geometric patterns. 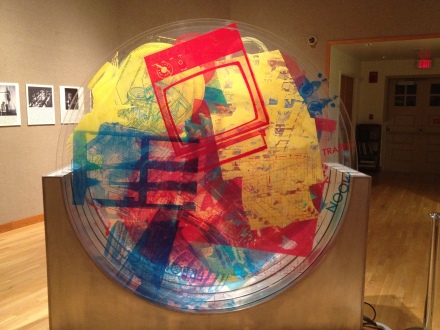 Andy Warhol was also involved with these Art Technology Experiments. On the second floor of the gallery there are 3 prints of Mao from sequentially produced photocopies made in 1973. Warhol started with a photocopy of a drawing of Mao Tse-tung and made a photocopy of the photocopy, then a photocopy of the second photocopy, etc. The copying machines 40 years ago did not make true to size copies, each copy enlarged the image .01%. By the 300th iteration of his process only an enlarged abstract portion of Mao’s face was visible.

Also in the exhibition are photos and ephemera from the largest collaboration undertaken by the engineers and artists: The design for the Pepsi Pavilion at Expo’70 in Osaka Japan. The exterior of the structure was a white Geodesic dome shrouded in a Fujiko Nakaya cloud sculpture. The photos made the structure look ethereal, almost delicate, like a folded paper origami dome. The interior was lined with Mylar, and there were some great photos of  visitors in the spherical mirror room showing unusual perspectives.

Although there was no mention of Mathematics in the wall text of the gallery, it is clear that Mathematics, through algorithms and geometry, played an important role in the creation of the art work made through Experiments in Art and Technology.