The Museum of Modern Art in NYC is currently hosting a huge retrospective of the work of Lygia Clark (1920-1988). Clark was a member of the Brazilian Constructivist movement. The walls of the first few rooms of the exhibition display the artist’s geometric abstract paintings.  On platforms in the center of the gallery, an assortment of  her hinged metal sculptures are on display. It is these sculptures I would like to discuss. There are a number of excellent reviews of the show online – the Brooklyn Rail is an example – but I would like to focus on the sculptures. Clark created these sculptures so that viewers could manipulate the shapes, creating different
forms, becoming part of the artistic process. At the MOMA show work tables are set up throughout the galleries with reproductions of the sculptures available for the public to participate. Photography is forbidden in these galleries so I decided to reproduce one of Clarks’s more simplistic forms using paperboard and tape and taking photos of my model.

Here is the construction process, in case you want to make one. You will need seven congruent isosceles right triangles.

Lay out four triangle to form a square and make three hinges leaving two triangles attached on only one side.

Take a fifth triangle and attache it to one those single attachment triangles so it is on top of the other triangle with one attachment .

Add the sixth triangle to the fifth so they form a parallelogram. 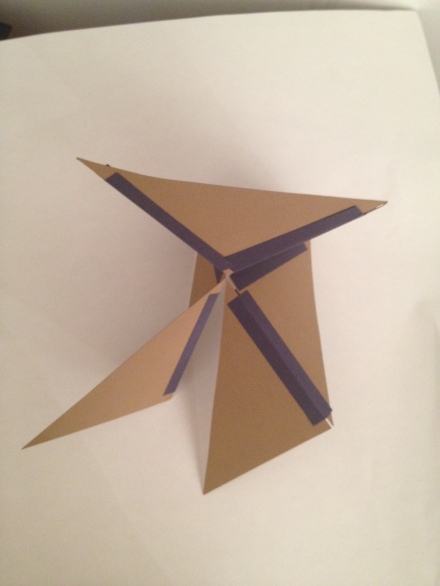 One thought on “Lygia Clark at MOMA”