James Siena artistic practice incorporates the use of rules to create art. I have written about his type writer work, as well as his sculptures, in earlier posts. Obviously I am a fan, and I was very excited to be able to see some of his recent drawings at the Pace Gallery on 24th st. This exhibition features work from three different series; “Manifolds,”, “Wanderers” , and “Nihilism”. All of the drawings are hand-drawn, geometric studies but the the series I feel that  has the most Mathematical implications is “Manifolds”. 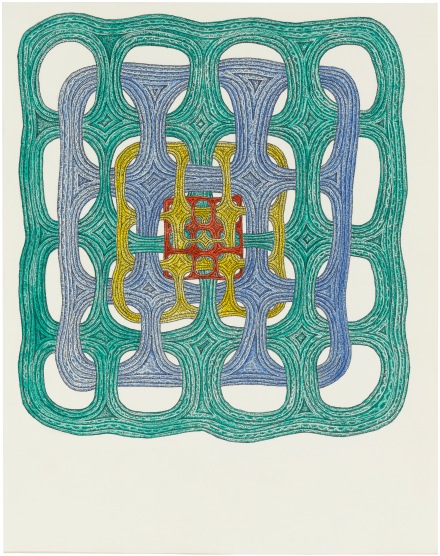 “Manifold X” from 2015 addresses the artist’s interest in the field of Topology. Topology studies the properties of surfaces allowing them to change through the manipulations of bending growing and shrinking without being cut or broken or having attachments added. In “Manifold X” the orange, yellow and blue surfaces are homeomorphic, they each have nine holes within their shapes . The green surface is different because it ha sixteen holes. The four surface are woven together but each individual shape does not intersect itself.  Siena has managed to take a fairly complex field in mathematics and develop a system of rules to create work that aesthetically beautiful and also expresses his affinity for the subject matter from which it is derived.
Susan Happersett

On my quest to find more MathArt I am always looking for clues. The cover of the January 2014 issue of Wallpaper magazine features a beautiful black line drawing . At first I thought the photograph showed a sculpture, but upon closer inspection I discovered that it was, in  fact, hand drawn with a compass by Richard Sarson. An award winning British artist and designer, Sarson has had his work featured in many publications, including the New York Times, Seed Magazine, Creative Review, and Eye. Sarson has exhibited extensively in Britain, including a recent show at Somerset House. 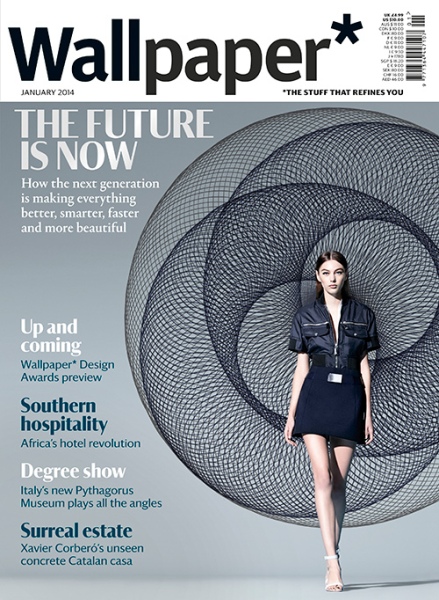 Sarson’s meticulous use of the compass creates the optical illusion of what – at first glance – resembles a tangle of three dimensional wire tori. Sarson created a video in 2010  titled “Circle” that shows his process creating a single torus drawing. A torus is the mathematical term for a doughnut-like surface. In topology, a Torus has genus 1 because there is only one hole.
In 2008, Sarson did a series of drawings he calls “Graph”. For these works he drew directly on millimeter grid graph paper. This technique allows the viewer a clear look at the Mathematical backbone of these drawings.

This drawing uses circles in descending order of the lengths of the diameters, starting with 80 mm, down to 70 mm, 60 mm, 50 mm, and finally 40 mm. This is an interesting twist on shifting concentric circles. The largest outer circles have a diameter  twice the size of the smallest inner circles.

Not all of his drawings are based on circles. In this next drawing Sarson used a straight lines  to create a sort of hypnotic drawing, working within the grid. Using 17 evenly spaced points 5mm apart horizontally along the top of the drawing and 17 evenly spaced points 10 mm apart 80 mm below the first line of points. The center points in each of the 2 rows of points line up along the vertical grid line. With this point structure in place, each point on the top row connects with every point in the bottom row. This creates an interesting study in the density of lines and shifts in the diamond patterns from the top 40 mm of the figure and the bottom 80 mm.
Richard Sarson uses Mathematics to build the framework for his drawings and then, painstakingly, brings his drawings to life. I must commend him for only using the most basic tools and executing all of his drawings completely by hand.
-FibonacciSusan